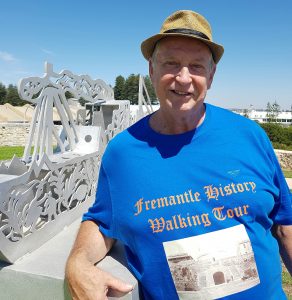 Thanks for taking the time to visit the site of Fremantle History Walking Tour  (FHWT) and I hope you choose to take this informative tour of Fremantle.

When you book this tour you are booking for the History and Heritage Tour and in this tour you will learn about Fremantle’s transformation from the little known colonial port that it was in 1829 to the international city that it is today.

Your tour guide Allen, (or Big Al), was born and raised in Fremantle. He is an award winning Fremantle historian and was involved in Fremantle public life during the America’s Cup. He brings these second to none Fremantle credentials to life during this informative tour that features a specially comprised picture folio that shows how Fremantle used to be.

Big Al has been researching and writing about Fremantle’s history for over forty years so many of the tales he tells are unique to this tour. Not that the words you hear are all his, for he also quotes the words of the early settlers which they used to describe Fremantle, or the feelings they held about living in Fremantle.

You will see that the price of this tour is very reasonable and Big Al looks forward to showing you around his home town.

Click here for reviews of this tour Trip Advisor.

There is so much to learn about Fremantle that you cannot learn about it all in the History and Heritage Tour, so FHWT offers the specialty tours that are listed below. So, if you have an interest in any of these tours then you will need to book direct with Big Al by calling +61412933360, or email him at pubs@iprimus.com.au

Early Fremantle Hotels: Fremantle has had a lot of hotels which figure prominently in it’s history. This tour shows where those old hotels were and tells of their importance in the community life of old Fremantle. While not a true pub crawl, the tour starts at a hotel, stops for a drink along the route and finishes adjacent to a very well located  hotel. It is best taken with a couple of friends as an afternoon, or twilight tour. (Drink costs not included in price.)

American connections: You would be surprised how many connections Fremantle has to the United States. Take this tour to hear what Captain Shaw had to say about Fremantle!